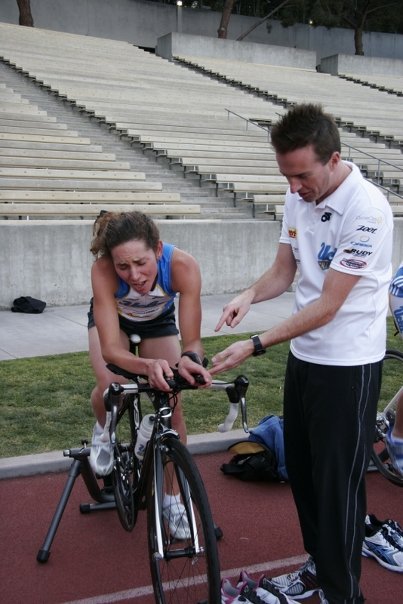 From 2007-2010, I was a member of the UCLA Triathlon Team, coached by Gareth Thomas at the time.  I was honored to be on scholarship with the team from fall 2008 to spring 2010.  The scholarship program was born much-owing to Gareth’s personal vision and excitement for the development of collegiate triathlon. He not only devoted his time, energy, and heart to our entire team, but also set aside valuable time to give the scholarship athletes some much-needed and much-appreciated attention and coaching.  He set up special pool times to record and critique our swimming strokes, drove us to bike fittings, and even took us for bike time trials where he video-taped and advised us in our cycling technique.  The wealth of knowledge and experience I have gained under coach Gareth is something that I consider extremely invaluable, and I am very grateful for his guidance.

While it is rare for a coach to invest in his/her athletes outside of the athletic arena, I have been fortunate enough to know Gareth as a friend, apart from our training sessions and lab tests.  He inspires me through his belief in people (athletes or otherwise), attention to detail, and dedication to his many passions in life.  In 2011, a year after I graduated from UCLA and had been removed from the triathlon “scene”, I came to Gareth’s personal recording studio with a song that I wished to record, asking if he might be able to help out.  Not only did he generously offer up his time and recording equipment, but he went above and beyond my expectations to help me revise and craft my song, spending many precious hours brainstorming, editing, and laboring for perfection.

This past summer (2012), after a couple years of haphazardly training and racing, I realized that I was slowly losing motivation to be “my own coach”.  As much as I loved the freedom and ability to do my own thing, train when I wanted, however hard (or not) I wanted, and however long (or not) I wanted, I knew that I was coming up against a big decision.  The liberties of not having a coach or accountability would not help me to fully develop as an athlete, however much I tried to set goals, discipline myself, or plan.  For a while, it seemed to be working just fine, but then I completely lost the desire.  I was failing to prepare myself for races, getting lazy with training, ignoring my need for challenging workouts, and at the same time I was holding on to high performance expectations for myself.  There were two options:

The former would not seem so difficult for most people, and actually seems refreshing and relieving, probably.  But, the issue with me is that I have a deep passion for sport, and my current itch, which began in my days as a Bruin, is for triathlon.  I have felt for a long time a confidence that God has purposely given me this passion and placed me in the triathlon community for now until He takes away either my passion or ability to compete.

The latter was an exciting concept to me, but I knew that as a grad student spending nearly all of my income on school and commuting to classes, I could not afford to pay a coach.  I looked into a couple of options, like joining a team which would include coaching for free.  While I was going through a sort of interview process, I happened to have a phone conversation with my good friend and UCLA coach, the aforementioned Gareth Thomas.  He asked if I was still competing and suggested that he might be able to sponsor me with coaching and lactate testing.  A few weeks later, we were hashing out the details and coming up with a race schedule for 2013.  And soon, I was in his testing and training facility in Brentwood: TRIO.

Thank you, Gareth, for your friendship, expertise, support, encouragement, and belief.  I am looking forward to 2013!