I am so proud to be a Bruin, and often look back on my days on the UCLA Triathlon Team as some of the most fun times in my life. It is crazy to see how much the sport of triathlon has grown and evolved in recent years, and this is especially apparent among college triathletes. We have seen the birth and steady growth of collegiate triathlon clubs over the past decade. UCLA Tri Club was born in 2001, thanks to Marcus George & co., and now boasts a (insert very big number) of active, triathlon-happy, members. At Collegiate Nationals 2010, I was fortunate enough to be invited into a room of people who were brainstorming about and stirring up a movement to make triathlon an NCAA sport. Fast-forward to 2014, and triathlon is now recognized by the NCAA as an “emerging sport” for females. This means that women will soon have the opportunity to race on varsity NCAA Triathlon Teams across the country! Earlier this month, Kelly Kosmo and Ella Eser (a former teammate of mine) placed 1st & 3rd in the NCAA’s introductory draft-legal sprint competition in Florida. This is HUGE for the triathlon community. Growth at the collegiate level means growth on all levels, and could potentially lead to high schoolers receiving college scholarships based on their triathlon success and potential. While I am extremely jealous of the youngsters who will grow up in a world where triathlon is an NCAA sport, I am equally excited for the future of our beloved pastime.

Hubs and my dad were kind enough to join me for the early morning (Dad picked us up and we were on the road at 5:30a.m.). Talk about love. We arrived, parked the truck, and hiked down to the field. I picked up my race packet, did a quick warm up run & bike, and soon enough it was time to set up T2 (there are two separate transition areas for this race). Everything was very official—just like the ITU Race I competed in this past June at Monroe, WA. We had cardboard boxes with our race #s to put all of our T2 belongings (run shoes, run hat, race # belt, spare calories) inside and set next to our transition rack.

Then, we hiked back up to the Sunset Rec pool, where I spent many a morning swimming during my freshman years on the UCLA swim team (good times…swimming way too much). I set up my T1 area (also in a cardboard box), prepped my bike for the quick mount by rubber-banding my shoes/pedals in their “ready position”. We had time to warm up before the race, and I was even assigned my very own lane! I felt pretty good in the water, but super nervous, as this was only my second draft-legal race and I am still adjusting to the pacing in this format.

Starting the race was an instant relief, as I quickly relaxed and began to let out my nervous energy. The swim felt smooth. I focused on my form—keeping my elbows high, kicking consistently, and accelerating my arms through the recovery of each stroke—and I managed to exit the pool first (scoring some sweet SIM shorts by ROKA!).

I scampered over to my bike, snapped my helmet chin strap, and booked it to the mount line. The mount was not super graceful, but I made it onto the bike and got my feet into my shoes quickly, before the descent into my first bike loop (of 5).

I knew that there were a couple of (at the time) unidentified women not-too far behind, and I wasn’t sure what to expect…were they going to stay put, or try to catch me and form a group, or just overtake and drop me from the get-go? I found out the answer pretty soon after the big descent, when Kelly Kosmo (ehem…the Kelly Kosmo, who just won draft-legal nationals!) approached and proceeded to pass me on my left. She was definitely moving fast, but I decided I should stick with her as best as I could for as long as possible, and perhaps we could have a nice chat while drafting off of each other; maybe share our favorite triathlon memories over a sip of energy drink. Alas, our pace was slightly too fast for much casual conversation. But, Kelly and I managed to let out a couple of monosyllabic encouragements. Partway through the first lap, we were flying down a hill into a sharp 90-degree turn into a highly-trafficked street (Westwood Blvd). I took the turn too wide and didn’t quite stay inside the boundary lines; thus, I lost Kelly for a moment, and worked to catch back up. Right about then, another strong girl (from UCSD) decided to join us, and I struggled to keep pace. We ascended a big hill coming into the finish of the lap, and I was feeling hesitant about maintaining this pace for the next 4 laps and running 3-miles afterwards. I didn’t have to make up my mind, because I soon got dropped by the two leaders (Kelly and UCSD woman), and I was all by myself, wondering whether I would be left to gut out the rest of my laps on this course alone, or if I might get passed by other chase groups moving along at too fast of a pace for me to latch onto…

In the meantime, another Bruin was gaining on me. Through the cheers of many a spectator, I discovered that she answered to the name of “Allie”. Allie caught me, and we rode together for about another lap. Then, another lady reeled us in, and we were three. This third gal was riding FAST, and I once again struggled (even more mentally than physically) to keep on her wheel. I gave some serious thought to letting her go, and I glanced back at Allie with a look of doubt. Allie was quick to shout “Stay on her wheel!” and that was enough to keep me going. I dug deeper and fought the instinct to back down and “save energy for the run”. We stuck on her wheel, and she kindly pulled us for nearly the entire remainder of the bike leg! What a trooper [*after the race, I spoke apologetically with this kind trooper about my wheel sucking, and she could not have been more gracious. “I was having so much fun! I didn’t care one bit” she offered. So sportswoman-like of her. She knows what it’s really all about: Enjoyment. That can be easy to forget when you are putting yourself through pain.]

T2 was a blurr…I really enjoy the simplicity of transitions in draft-legal racing. You are only aloud a small space, and must narrow your items down to the essentials. This makes transitioning less stressful, and much more efficient. Bike on the rack. Helmet off. Glasses off. Run shoes on. Grab hat and race belt and accessorize as you run out.

Allie and I were running shoulder-to-shoulder for the first mile-or-so of the run course (a 3-loop course with one big uphill and one big downhill). We were trailing a bit behind “sportswoman-like trooper woman”, and stayed behind her for the remainder of the race. As Allie and I approached a major turn, I began to veer off in the wrong direction. Allie politely corrected me, and I was very grateful to not have wasted more than a couple of strides. It was a warm morning, and although I had been drinking a lot of water before the race, and had consumed 20ish oz of Fluid during the bike, I was feeling awful thirsty. With a ring of sticky sports drink around my dry lips, I eventually pulled ahead a bit, and completed the last two laps at a steady pace. As I neared the finish, I could hear bystanders cheering for someone behind me, and I decided that I was not willing to give up my position in the last 100m of the race. I kicked it in, promptly found Brice and my Dad, and stole the first water bottle that I could find. 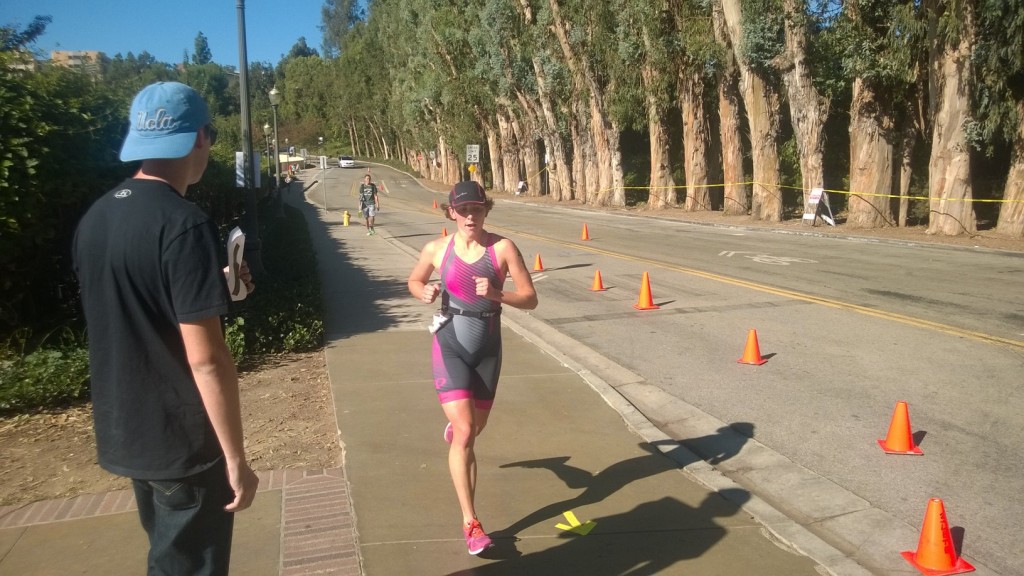 In draft legal racing, strategy is so tricky. Each decision must be weighed not only by your own body and mind, but you must also take into account the fitness and race tactics of your competitors. I love this element of suspense—will she give everything in the bike and then I can pass her on the run? Is she just cruising right now and saving up for the finish? So many unknowns; so many mind games and battles and in my own head.

We hiked back up to the car, took the scenic PCH home, stopped for Mexican food (fish tacos and a margarita) in Oxnard, took a dip in the ocean, and then got ready to jam with the Briar Rose Ramblers.

Much gratitude, from my heart, to these folks:
• Brice, my photographer, cheerleader, & daily encouragor
• Coach Gareth of TRIO, superrrr good friend and supporter. He has coached me since my very first days as a baby triathlete.
• Sean Logan, amazing friend and generous sponsor: Pearl Izumi gear, Fluid
• Mom & Dad, my drivers, cheerleaders, bike sponsors, and awesome child rearers
• All of our lovely, supportive, family
• Training buddies: Michelle, Terri, Ashley, KHamm, Jessica, Moose & Emma
• Lauren Davis, who created this FAB site!!!
• Annette, the one who cranks out those delicious BrittFit Bars
• UCLA Triathlon, for the memories and ongoing awesomeness