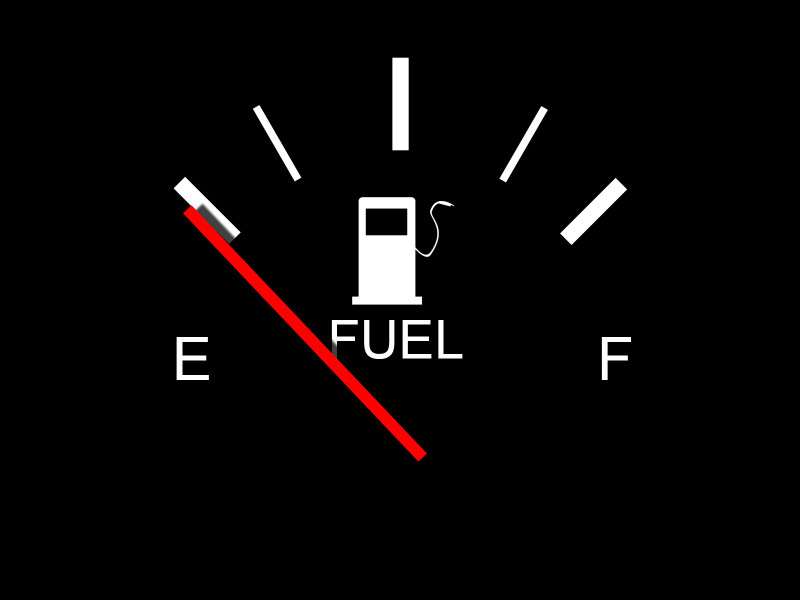 Have you ever felt like your fuel gauge has dipped below “E” in the middle of a long, intense workout or race?  Have your friends frightened you with horror stories about “hitting the wall” or “bonking”?  Let’s investigate the true sources and symptoms of these endurance athlete issues.

If you, like myself, have ever assumed that a single 300-calorie bagel and 24-oz bottle of water would be sufficient to fuel you through a 4+ hour bike ride, complete with sprints and grueling climbs, then you know what it means to “hit the wall”.  You end up dragging yourself home, convinced that the air you are riding through is made of concrete (i.e. “the wall”), and dreaming Gatorade-filled fountains, counter tops covered in deep-dish pizzas, and lots of fluffy pillows everywhere…

This “wall” does indeed exists!  The culprit is not concrete, but depleted muscle glycogen.  The 1,400 (for males) carbohydrate calories stored in your muscles as glycogen, are used during exercise (Clark, 2013).  As these stores may last for many hours, complete depletion is more likely to occur during longer-distance training sessions and endurance events such as marathons and full-distance triathlons.  Yet, failing to refuel muscles after multiple training sessions on end can leave muscle glycogen stores low–not a great way to start your next 5-hour workout!  Your body relies on fuel consumption pre- and during- exercise to keep up with energy needs.

Maybe you haven’t quite hit the wall of depleted muscle glycogen, because every time you attempt your 3-hour bike-run workout, you start getting dizzy and unable to focus after 2-hours of cycling and running.  You aren’t hitting your prescribed power and speed zones, but still feel burnt out, like you could faint, and are forced to cut the workout short.  Perhaps you still have juice left in your muscles, but your brain function is suffering...

In addition to fueling active muscles, pre- and during- exercise fueling is necessary to keep blood sugar levels stable.   Your liver also releases stored glycogen into the blood, but liver glycogen stores are limited to about 320 kcal of carbohydrate (for males) (Clark, 2013).  Once liver stores are exhausted, and if fuel consumption is inadequate to restore blood sugar, hypoglycemia (low blood sugar) occurs.  Without adequate sugars in the blood, the brain cannot be fueled.  This lack of fuel to the brain can lead to decreased coordination and concentration, most certainly hindering performance.

I (maybe) know what you’re thinking…

“I am well-trained and have lots of glycogen stored in my muscles, so I should’t really need to eat during my 3-hour rides”.  Have you considered that your brain needs fuel, too?  You can “Bonk” even when you haven’t yet “Hit the Wall”.  If you deplete your liver glycogen by not consuming enough fuel before/during exercise, despite having sufficient muscle glycogen to fuel muscles, your blood cannot supply your brain sufficient energy from glucose.  To get the most out of your training, fuel your brain!

“I want to burn extra fat, so I shouldn’t eat much before/during long workouts.  That way, my body will burn fats instead of carbohydrate for fuel.”  In fact, if you restrict carbohydrates before/during workouts when your body needs fuel, you may burn a higher percentage of calories from fat but will actually burn fewer overall calories.  This is because your body’s preferred energy source is carbohydrate, and while you can use fat for energy during exercise, your performance will likely be hindered.  It is better to train your body to perform (and be fitter) by supplying it with the energy that it prefers for activity!

Fueling pre- and during- long and/or intense workouts and events is necessary for optimal muscular and cognitive function!

How to avoid the Wall and the Bonk:

Fuel pre-exercise (especially before morning workouts, after a night of fasting) with about 2 kcal (or 0.5 g) carbohydrate per pound of body weight (Clark, 2013).  Aim to consume this pre-workout snack within the 60-minutes leading up to your workout.  For example, a 150-lb distance runner would aim to consume about 300 kcal (75g) of carbohydrate between 6 and 7 a.m. for a long run beginning at 7 a.m.  An example of a 300(ish) kcal snack would be 1 c. cooked oatmeal with 1 T brown sugar, plus a banana.

If you are consuming your pre-workout meal/snack 2-hours prior to your workout, you can double the carbohydrate content of your meal (e.g. 600 kcal for the thlete mentioned above).  This might look more like two slices of whole grain toast, 2 T. berry preserves, a cup of fruity yogurt, and a large glass of orange juice.

Fuel during exercise, especially during especially long and/or intense workouts.  For workouts lasting between 1-2.5 hours, about 30-60g (120-240 kcal) of carbohydrate per hour is recommended (Clark, 2013).  Your fueling needs will depend on many factors, including how well-fueled you are going into the workout (blood sugar and glycogen storage statuses), how high of an intensity you are training at, gut tolerance (which can be trained!), etc.  Workouts exceeding 2.5 hours in duration may require up to 90 g (360 kcal) of carbohydrate per hour.  Common during-workout carbohydrate sources include sports drink, energy gels, energy bars, gummy candies, crackers, and other simple forms of carbohydrate.