In early 2013, I wrote a blog post series on the lactate-based training that my coach, Gareth Thomas, implements from his Los Angeles sports science facility: Trio. The first post includes a blurb on how I met Coach Gareth, while the second goes into depth on the scientific basis of his lactate-based approach to endurance training.

Now that nearly 2 years have gone by, I’d like to report some exciting results in the TRIO lab. First, a bit of my training background:

2004-2006: High School Cross Country + Club Swimming
2006-2007: D-1 Womens’ Swim Team Walk-on + Completed 1st Marathon run (with terrible training, and at least one injury)
2007-2008: Dabbled in Collegiate Club Triathlon + Talked myself into buying a road bike
2008-2010: College Triathlon “glory days” (best triathlon shape of my life), coached & mentored by Coach Gareth
2010-2011: Took a break from training, taught swimming lessons in New Zealand, decided to do a couple more triathlons, got humbled by Wildflower & Long Course Worlds (first DNF ever)
2012: Trained on my own, finished a few more triathlons, got humbled some more (almost DNF’d again)
2013: Return to Coach Gareth for HELP! Made some solid improvements, then took a couple of months off to re-evaluate and recharge mentally
2014-2015: Got married, and decided to really get into this whole triathlon thing again, this time with a brand new last name

Now, for the good stuff. Since I came back under Coach Gareth’s wing in early 2013, I have seen a general trend of improvement in my training and racing performance, which is paralleled in my lactate testing results. As I have had a bit of inconsistency (2-month break after 2013 season), and since training fluctuates to accommodate periods of resting and racing, some tests have shown that my fitness has taken a minor “step back”. Yet, the big steps forward, and overall gains, are my reason to trust in this scientific training philosophy. 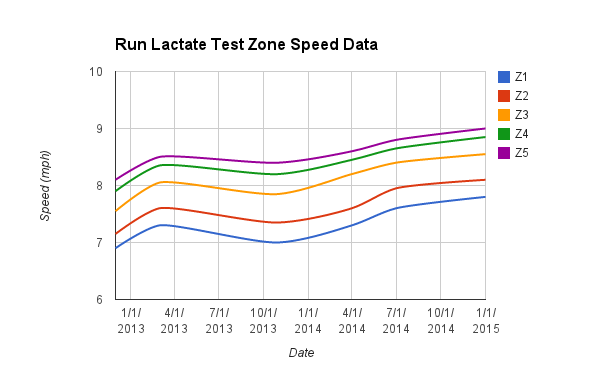 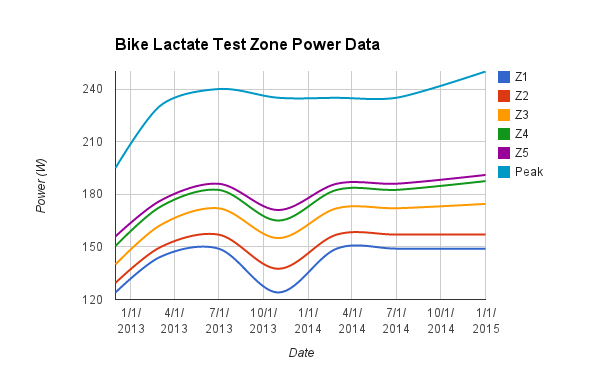 Note the general speed and power improvements within each training zone from 2013-2015. Also note the substantial dip in fitness during my break at the end of 2013. It’s been 2 steps forward, 1 step back, 3 steps forward, and…TBD. Seeing my progress plotted graphically is a very tangible way for Gareth and I to gauge the effects of each training period–to see what is working best for me, what needs to be adjusted, and where we need to focus moving forward.

I am super grateful for Gareth’s support throughout the years, and excited to put in the work this season to continue improving. I will keep you updated.